A Pantymwyn Resident through and through, Mona was the fount of all knowledge about the community, and gave her life in commitment to the Community. She served on the Community council for many years & was chairman on a number of occasions, as well as being president of the Village Hall committee.

In her chosen profession of nursing she was a sister at Alderhey Children's Hospital & raised huge amounts of money for their charity for which she was awarded the honour of a Member of the Order of the British Empire.

SEE GALLERY FOR PHOTOS OF MONA AT DIFFERENT PAST EVENTS OVER THE YEARS.

Village pub is a jewel in the Crown 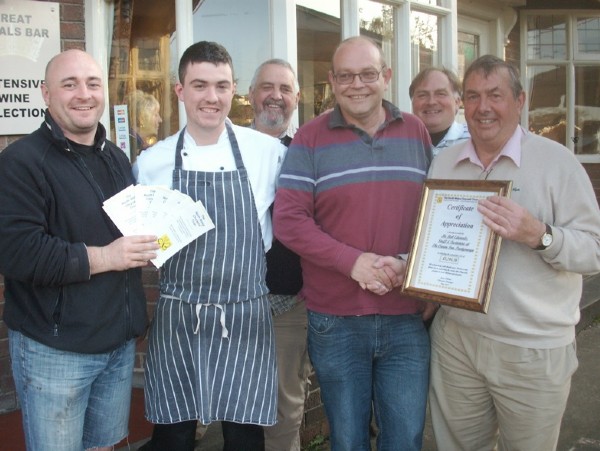 A Sunday quiz night at a Flintshire pub has proved to be a real fund raiser for a charity helping local families. Regulars at The Crown Inn, Pantymwyn, have raised £1,194.50 for the North Wales Chrysalis Trust thanks to the weekly fun quiz. The money collected at the pub has been raised since Rob Edwards took over as licensee in August 2010 although The Crown has been raising money for Chrysalis for many years.

In April this year Rob, along with business partner Matt Brady signed a 10 year lease to run the Crown Inn as a free house. Rob said: “We are not only proud to support The North Wales Chrysalis Trust as our nominated charity but also the villages of Pantymwyn and Gwernaffield.

“With the future of the pub and restaurant now secure and trade very busy we are delighted to be offering a high quality food and drink service while raising much-needed funds for such a worthwhile charity into the bargain.”

The North Wales Chrysalis Trust is a registered charity providing professional counselling, advice and information for families across Flintshire, Denbighshire and Conwy who have a child diagnosed with a life-threatening, life-limiting or terminal illness. Bereavement counselling is also available for parents and siblings following the sad loss of a baby, child or young adult through illness, accident or still birth. Dave Ashworth from Pantymwyn, a trustee of The North Wales Chrysalis Trust is thrilled with the Crown&lsquo;s ongoing commitment to Chrysalis. He said: ”I would like to thank Rob, Matt and everyone at the Crown Inn for their terrific support. It is really appreciated. There is a great community spirit in the pub and we really do appreciate everything staff and customers do for Chrysalis.”

Half a million steps for charity

Two hardy volunteer trustees are putting their best foot forward to raise funds for a North Wales charity urgently in need of funds.

David Ashworth (66) and Adrian Barsby (52) both from Pantymwyn are preparing to tackle the 150 mile Pilgrim’s Way over eight days, totalling around half a million steps, following in the footsteps of pilgrims dating back many thousands of years. They will set off in the Queen’s Jubilee Week on May 26th and finish on Coronation Day June 2nd.

The walk from Basingwerk Abbey in Greenfield to Bardsey Island off the Lleyn Peninsula is set to raise many thousands of pounds for The North Wales Chrysalis Trust, a registered charity providing free information, professional counselling and support to families who have a child diagnosed with a life threatening, life limiting or terminal illness as well as to parents and siblings following the sad loss of a baby, child or young adult through illness, accident or stillbirth.

Grandfather of seven David, a retired Shell Research Engineer was a keen sportsman in his youth and is a very keen walker and supporter of local charities. He has been a trustee of Chrysalis since 2004.

The Pilgrim’s Way route is steeped in fascinating history and takes in some of the most significant places of religious, spiritual and cultural heritage in North Wales with some of the early sections running through areas steeped in Bronze Age and Early Christian remains.

Landmarks along the way include the Pantasaph Monastic Retreat, the Maen Achwyfan ancient stone obelisk, a Bronze Age mound at Trelawnyd, St Beuno’s College at Tremeirchion, St Asaph Cathedral, the historic churchyard of Llangernyw with its 4,000 year old Yew Tree, the Ancient Stone Circles at Cefn Coch, Bangor Cathedral, Caernarfon Castle, Clynnog Fawr and on finally to Bardsey ‘the island of 2,000 saints.’

Business Consultant Adrian is ready for the challenge and keen for others to join in. He said: “I’ve known Dave for several years and he introduced me to Chrysalis so I’m very much looking forward to walking with him to raise much needed funds for the charity.

“We have divided the walk into eight sections of just under 20 miles each and would love people to come and walk with us for as short or as long a distance as they would like. Also we are looking for people to sponsor us and companies to sponsor us for £200 a day as well as for volunteers to shake a bucket for us on any part of the walk. Chrysalis is a wonderful charity doing great work and urgently needs funds so all help will be very gratefully received.”

Chrysalis Fundraising Manager Debbie Barton says: “This is a terrific effort and we really hope individuals and communities will get behind them to support them along the way. We wish them every success in their fundraising efforts which all helps towards our current annual target of £70,000 and our ultimate aim to be able to offer the Chrysalis service to all families in need in North Wales.”

To sponsor David and Adrian in support of Chrysalis please contact The North Wales Chrysalis Trust on 01745 448783 (extension 2212)/ chrysalis.trust@wales.nhs.uk or make an online donation at www.justgiving.com/Chrysalis-Pilgrims-Way

For more information on the Pilgrim’s Way see: www.pilgrims-way-north-wales.org

Thank you to all the organisations and individuals who took part

The event raised over £1000 towards the continuing renovation of Pantymwyn Village Hall.

The Village Hall Committee would like to thank all those who helped make the event such a huge success.

(pictures of the day can be seen on the website gallery)